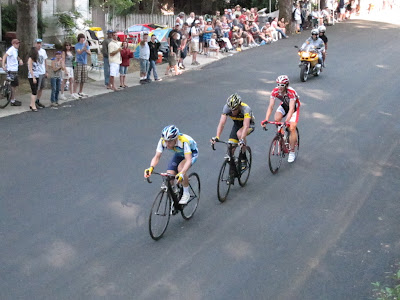 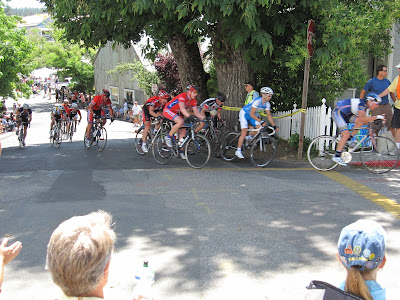 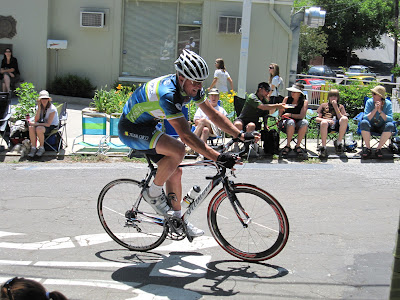 On Fathers Day each year our little town, Nevada City, holds bike races. They have been happening for many years. In the past few years the crowds have dwindled even though the racers continue to race to the fullest.
Well, this year we had the fortune to have Lance Armstrong and two of his team mates agree to race in the main event. This is in preparation of hopefully having Nevada City be on the California leg of the bike races that go through Sacramento.
I am no bike rider, let alone racer, but this course is grueling. We have lots of hills and elevation changes for the riders.
So this year Mr. Hubby and I spent from noon until about 6:30 pm on Sunday Fathers Day enjoying the excitement of our little town. It was a beautiful day and the weather could not have been more perfect. It was definitely cooler than in past years so that helped a lot. We walked the entire course at least four times in total. The crowds were well maintained and cheering on each and every group of riders. We enjoyed local food and even a libation in the local "Mine Shaft" saloon.
I must say I am not a groupie however it was spine tingling to be so close to a living legend...Lance Armstrong. Yes, he did win his race and he and his two team mates are in the first photo. Lance is wearing black and yellow and his number is 2. They rode so well that they almost immediately ran ahead of the group of 130 racers in that heat and that is why the photo is only of them.
The middle photo shows a group of racers heading up a rather steep hill (I know the picture does not show it well). The third photo is of a racer who was not in the lead but never gave up and kept grinding it out all 45 minutes of his race. The race Lance and team were in was 90 minutes with a lap consisting of approximately 2 minutes. Whew! I got exhausted just watching everyone.
It was a wonderful way to spend Fathers Day with Mr. Hubby as both of our fathers are long passed away.

Posted by Createology at 9:57 AM