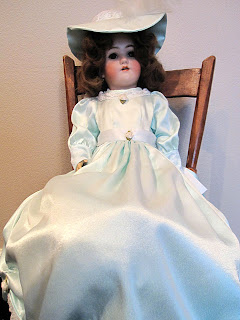 Please let me introduce you to Miss Gwendolyn.  I have mentioned her before but never really told you much about her.  She is very shy and extremely quiet...unlike me.  Here she is sitting in a little wooden chair that Mr. C purchased.  He actually purchased this chair for Anne Sherry but Gwendolyn liked it so she acquired it.  It seems to suit her just fine.  Before Gwendolyn sat on my Grandparents bed and Grandpa got tired of moving her every night so he went out one day and bought her a little wooden high chair.  I don't have it but I wish I did.  Nothing special but the memory of Grandpa doing something so sweet for a doll which was completely out of character for him. 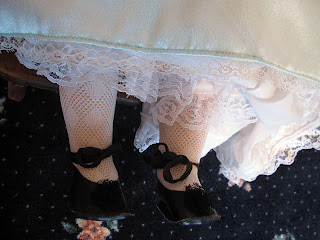 She wants you to see her fancy stockings and lace pantaloons.  And she loves her little black Mary Jane shoes that tie around her ankles.  She does not like her dress or hat because it is not of the quality she used to wear however the previous silk fabrics began to wear thin and were horribly faded.  Grandma had a nice lady in Utah make this outfit for her.  Some day I am hoping to make her a "proper" outfit once again so she can be dressed in the manner she was accustomed to. 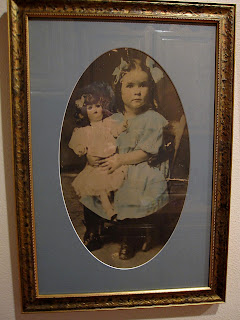 Gwendolyn actually belonged to my Grandmother.  This photo is showing them both.  Mr. C actually had this very old bedraggled photo matted and framed for me one Mother's Day years ago after my mother passed away and I then received the photo.  Pretty special from a man who doesn't like dolls and isn't sentimental. 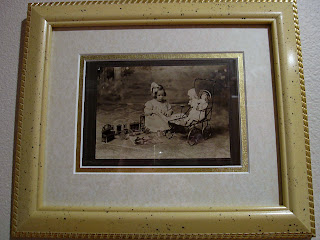 Here is another photo of my grandmother and Gwendolyn.  This is just so precious to me to have these photos to go along with this beautiful doll.  I just missed buying a carriage like this one at the Doll Shoppe in Hobby City one day.  The curator couldn't believe I walked in with Gwendolyn just an hour after another woman bought the carriage. 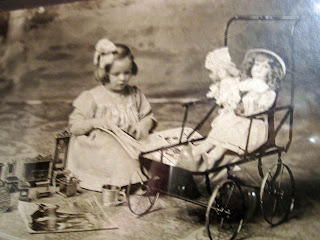 A close up to show the little tea party they were having while reading to one another.  Priceless! 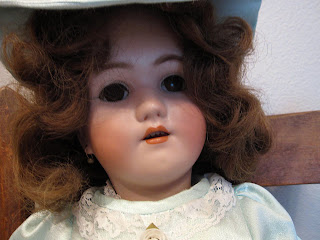 Here is a close up of Gwendolyn so you can see her pierced ears, tiny little teeth and big brown eyes.  I think she is the most beautiful doll ever.
Although Grandma had this doll for so many years, the photo is taken approximately 1911 as Grandma was born in 1906 and she is about 5 years old here, she never named her doll or so she told me when I came to visit.  I would always ask if I could go in to her bedroom and look at her doll and there I would stand for the longest time just admiring her.  One day Grandma asked if I would like to hold her and that was the best ever.  She asked me what name I would give her and I immediately said, "Gwendolyn".  I have no idea where that name came from but to this day she is Gwendolyn.  Thank you Grandma for allowing me to enjoy Gwendolyn and keep care of her for you now that you are gone (many years now).  I so love you both.
With tears in my eyes (I am extremely sentimental) I am sharing my Gwendolyn with you as part of Memory Lane Mondays.
I feel so blessed to be entrusted with Gwendolyn until my daughter will inherit her and carry on the legacy.
I look forward to reading your shared memories...
Posted by Createology at 9:17 PM