Wayne on the Train... 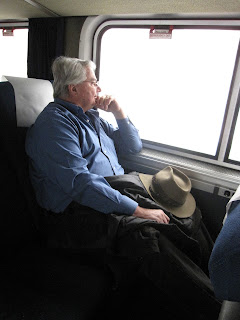 2017 is the year Mr. C aka Wayne wants to have experiences and "Discover".  After having lived here almost 20 years he decided it was time to take the "Snow Train" to Reno.  Well he has selected the perfect time for snow. After 5 years of extreme drought the mountains are getting record snowfall.  Of course he insisted I must also go on this adventure.  No iPad and no hand work and no distractions for me were allowed!  Nothing, nada, zip...He wanted my full attention! 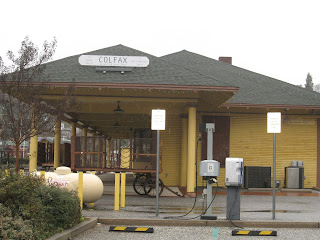 We drove the 12 or so miles to Colfax on Thursday morning to board the 12:21pm California Zephyr headed to Reno.  It was scheduled to arrive at 3:56 pm and we had reservations for one night at Silver Legacy with separate dinner reservations in Reno. 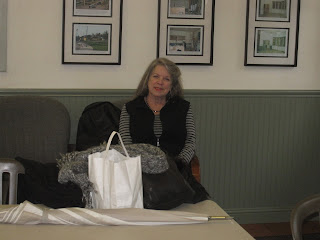 Here I am waiting in Colfax. I had a nice visit with the Colfax Chamber Volunteer Amy and there is a very interesting museum to view at the station. 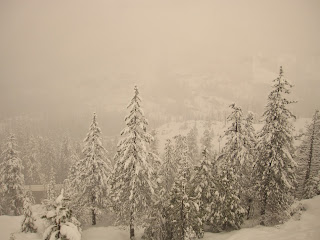 Along our route we got to see lots of things we never see from the Highway (80) which goes over Donner Summit to Reno.  Here is a good image of the snow as it was softly falling. 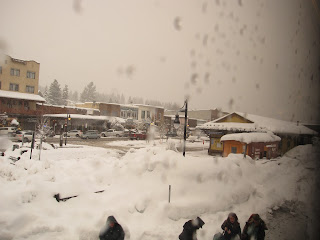 This is pulling into the Truckee station. Lots of snow and lots of happy skiers in town.  We are now just about half way to Reno.  The train was full of passengers and we had seats with good views.  The observation car was very crowded so we stayed in our coach most of the time.  Ahhh...with only a few slight delays and very slow going we arrived in Reno just over two hours late.  A short walk in cold but dry and we are in for the night! 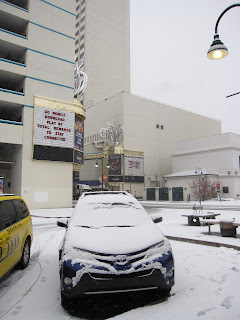 Friday we are up early at 6 am to gather ourselves and eat breakfast (we were quite hungry from missing lunch yesterday) before boarding our return train for 8:36 am departure.  Snowing in Reno and for our walk to the depot.  This is a lot of snow for Reno!  Let me just say our train did not depart on time.  We waited a long time and then it was announced that we would be leaving in about 10 minutes and anyone who wanted to get off and smoke or stretch could do so.  Ten minutes honestly turned into 6 hours!!!  Delays due to snow, downed trees on the tracks ahead and so on.  Once we finally got moving we were all relieved to say the least.  This is supposed to be just over a 3 hour return trip to Colfax. 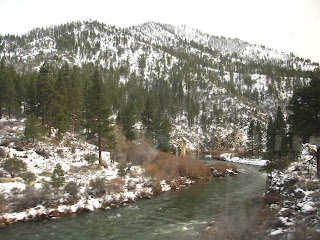 The scenery is stunning.  The Truckee river is flowing with lots of water and the mountains are white with fresh falling snow.  Our trees just may save themselves with moisture they are so desperate for. 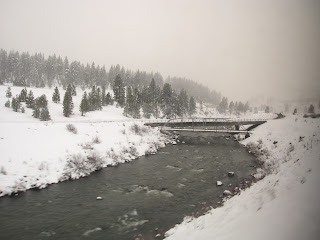 Our train traveled slowly and the countryside was beautiful and ethereal.  Wayne is enjoying his train ride.  The wait was long and he has zero patience but I must congratulate him for staying rather calm.  We did have a few people to entertain us and talk with.  Of course there are always a few not so pleasant folks to avoid...so that was a challenge. 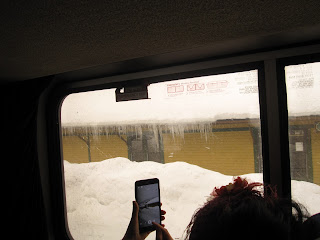 Here is Truckee with a lot more snow than yesterday.  I forgot to look at the time but let me just say we are very late and more people are waiting to board.  This California Zephyr (I never got a photo) is the train that travels from Emeryville (San Francisco) to Chicago and back again. 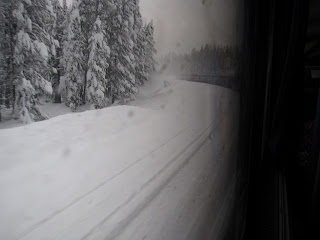 More delays along the way while we waited for snow plows and such.  The snow is really thick! 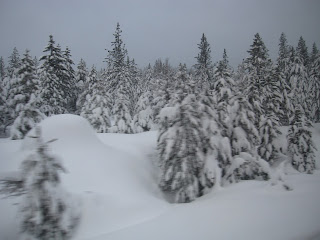 This is the last photo we took of the trip over Donner Summit.  We were stopped again and it actually got dark.  The train trip is not as nice in the dark because you cannot see anything.  We had such a long stop in the middle of NO WHERE.  This train had no provisions for dinner as their end destination was to be around 5 pm. Oops!  An announcement asked if anyone on board had a can opener.  We all laughed.  Well a gal had one but it wouldn't work.  So another announcement asked if anyone had a real can opener with a dial?  Who travels with such an item?!!  By golly someone had one.  A bit later, around 7 pm, it was announced that the dining car would serve Dinty Moore Beef Stew over rice and would call us up car by car.  If you wished to eat you must hurry and not talk.  Wayne and I were so hungry (any snacks I had brought were long gone...actually I think I ate them on the train ride the day before) we almost ran when our car was called.  I only wish I had a photo!  Bless the staff for trying to feed 200 people overall.  It looked like a small snack plate of doggy delight.  We also got a small bottle of water.  YUM!!!  Thank you very much and I was truly grateful.  There were lots of people who were rude and or didn't want to eat so they stayed in the observation car (remember it is very dark now) and enjoyed lots of alcohol imbibing.  Quite the rowdy bunch but no one got out of line too much. 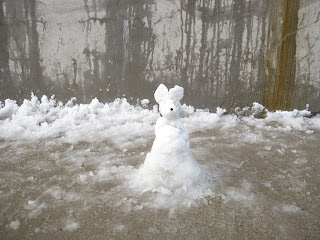 This little Snow Mouse was created by an adorable little girl while we were still in Reno at the depot.  She was traveling with her younger sister and even younger brother, father and grandmother.  I must say that other than the two littlest ones (maybe 3 and 5) running through the cars they were rather well behaved for such a long short trip.  All in all Wayne and I arrived in Colfax just before midnight!  We were able to get our vehicle and drive home in pouring rain and some fog.  Thankfully our snow was minor and the driveway was clear.  Needless to say we both hibernated most of Saturday and today we are moving very slowly.  Our trip was fun and exhausting.  It truly was an adventure and Wayne got to ride the Snow Train!  I apologize for such a long post but honestly I did leave out a lot to shorten the story.
P.S.  I did tell Mr. C that I will NEVER travel again without some sort of hand work!!!
JOYful January...
Posted by Createology at 3:19 PM