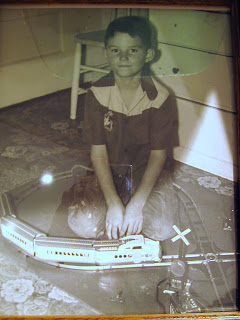 Once upon a time there was a little boy.  His family was not well off.  They didn't have much.  There was a father, mother, sister and brother.  The father worked as a glazier.  The mother was the homemaker.  The sister was a brat (according to her brother).  The brother was an angelic child (according to him).  This little boy is now my husband so I get the story straight from the source.
This little boy desperately wanted an electric train set for Christmas one year when he was about 9 years old.    Here is a photo of him with the train he actually received.  It is not electric and the little boy was very disappointed.  The smile in this photo is a forced smile. 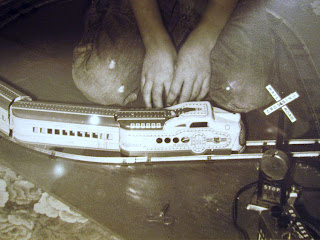 Here is a close up of the train.  Can you see the key laying down in front of the tracks?  This train set was a wind up version.  The little boy's heart was broken.  It wasn't just about not getting what he wanted...it was about his father never doing anything for him or with him.  This little boy grew up to dislike all holidays and birthday celebrations due to the disappointment he always experienced while growing up.  Now fast forward to me meeting this little boy who is now a man.  When I met him he was very stoic and was always working to provide for his family (even for grown adult children).  He did not have that magical childlike wonder in him.  I have plenty in me so I made it my goal to share mine with him and bring out the fun for him to enjoy.  After 25 years I believe I am making progress.  However I have gotten side-tracked...just like a train. 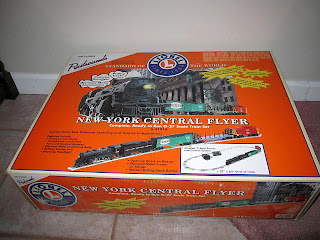 When this wonderful man turned 60 I threw him a surprise birthday party.  I rented the local pizza parlor.  I invited lots of his friends (most of whom are car buffs along with him).  I had a theme for the party...trains.  This was to be the party he never had when he was 9.  I have no photos of the actual party but I can honestly say it was a huge surprise and everyone had lots of fun (yes the grown ups got to have beer).  This photo is of the train set...ELECTRIC...that I bought and gave to him.  It was the closest to what he had wanted that I could afford.  I had to search high and low for this.  Even my girlfriends helped me search (it helps that we all love to shop).  My little boy who is now grown into a wonderful man was very touched and surprised.  He finally has his electric train and each year that we put up a Christmas tree (some years we are gone) he lays out all the track and surrounds the tree with his train.  When the train is running it has a wonderful whistle and full recording of a real train chugging along and it has smoke from the stack.   Now there are happy smiles as that little boy plays with his electric train.
I could never change his childhood and how he endured growing up.  What I can do is share my childlike wonder of magical things and hope he begins to BELIEVE.  You can be certain no matter where we are at Christmas...Santa always finds this little boy and leaves him presents and a filled stocking.
Thank you for traveling down Memory Lane Monday with me.  Thank you Donna of Brynwood Needleworks for hostessing this each month.
We definitely have had rain!  And it was "Biblical Proportions" that was predicted.  Over 12 inches in about 5 days so that will last us a while.  What?  More rain coming?  Okay since this is really Winter for us.  Our ski resorts did finally get some snow.  These storms were a "pineapple express" so it was warmer than needed for snow.
I am truly enjoying seeing all of your holiday decorations and gifts you are creating.  Lots of beautiful inspirations.  Thank you all for sharing so much.
Joyful Jingles and Creative Bliss to all...
Posted by Createology at 9:24 AM